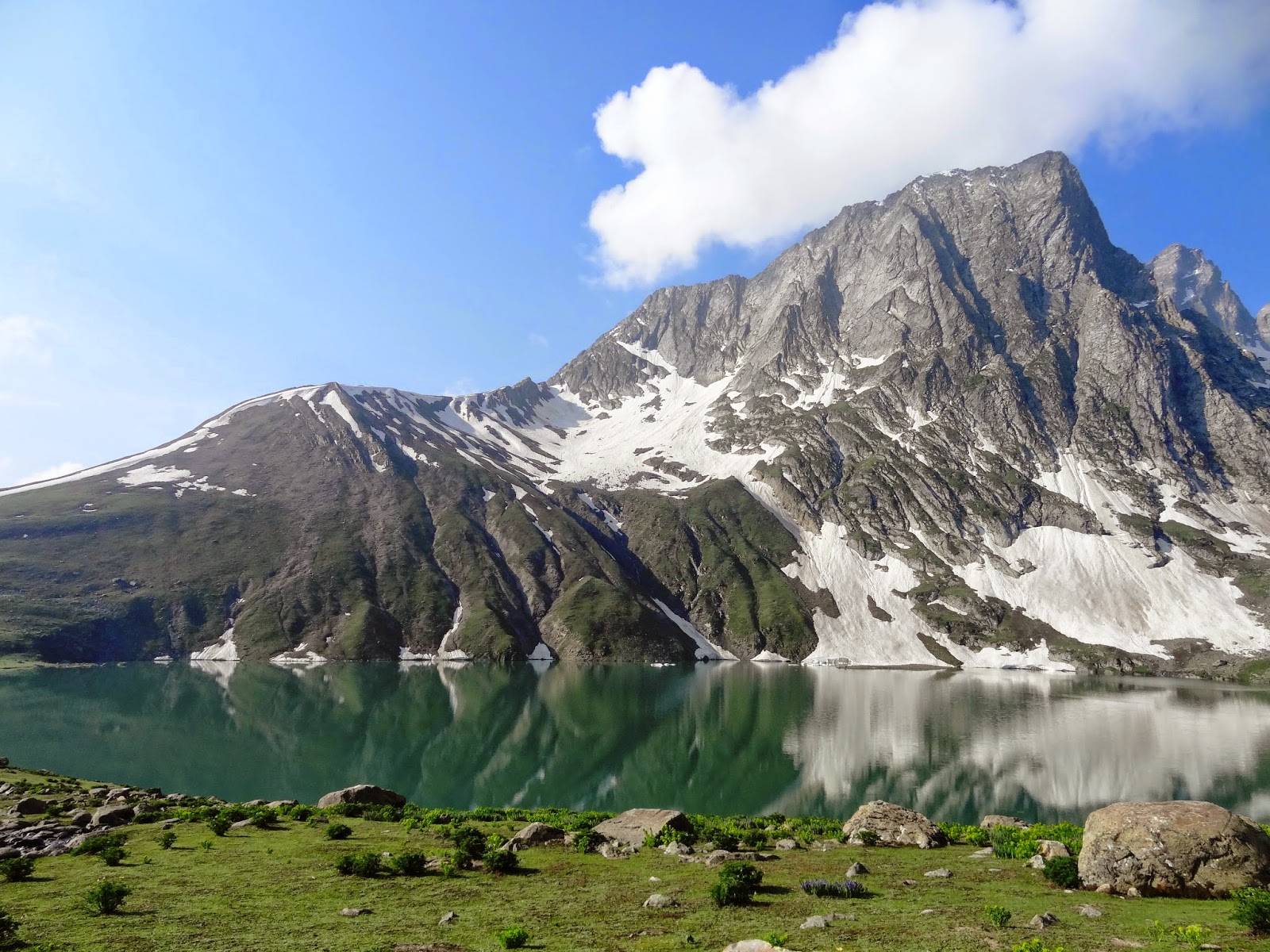 It was going to be a long day of trekking of about 17kms. Now that I had already trekked successfully for 2 complete days, I was confident of doing this stretch effortlessly. I thought that the trails would be similar and I could manage. But I was proved wrong and was tested not only physically but also mentally.
As we started the trek, we had to cross a river to get onto the actual trail. The water was lashing the boulders and the flow was pretty swift. There was a long boulder patch to cross and we had to do it without letting water get into our shoes from above the ankle. I was crossing the river way too cautiously when I landed on one loose boulder. I lost balance and slipped in such a manner that my right leg hit one boulder real bad and my leg got stuck between two boulders. My leg was immersed in the river, ankle deep and to my disappointment water got into my shoes. I slowly managed to pull my leg out and cross the river.
We had to trek uphill for a while to get another view of Vishansar and water in my shoes was making this stretch extremely difficult and uncomfortable. We then stood atop the mountain to get an awesome morning view of Lake Vishansar. The water was crystal clear and the natural colours were extremely soothing to the eye. Everything in its natural untouched form is very appealing to the human eye. God’s creation is simply magical.
The water in my shoes was really annoying and I had to squeeze the water out before trekking any further. Aniket and Anirudh helped to squeeze out water from my shoes and also dried the sole with tissues. It was a sweet genuine gesture  and I thought to myself , ” Sometimes strangers are just friends you haven’t met yet”.
What followed was a tough uphill trek. The trail was in a circular fashion around the mountain but was extremely narrow. We had to trek one behind the other and there was no possibility of trekking side by side. One wrong step and you would fall straight into the valley. The best way to trek such patches is to bend slightly forward and lean towards the hill side while taking small steps. That way you feel a bit more secure. My heart skipped a beat every time a stone or rock tumbled down into the valley. It was hard to imagine what would happen if one fell in such a manner.
People with Acrophobia for sure would have had their heads go spinning. It was extremely sunny and the trail was never ending. After every small milestone I looked up to see how much more was left to traverse and the peak was always at some crazy unachievable distance. It took four long hours and some real hard prayers to reach the mountain peak. This is called the Gadsar pass – at an altitude of 13,800 feet- the highest point in this trek. I was breathless and my heart was pounding fiercely. I couldn’t believe that I made through this path.It was only on reaching the peak did I happen to see what lies beneath and I was taken aback by an exotic view of twin lakes Kishansar and Vishansar.
My ears and neck were totally sunburnt and as I peeled the skin off my ears , they began to bleed.I suddenly saw one of our helpers crying with pain. He had a very bad tooth decay and it was probably neglected for long. The dentists in our trek group, treated him and gave him a pain killer. As we spoke to some of the localites, we realized that medical aid was not easily accessible to the villagers. They had to travel long distances to see a doctor and most times they would neglect illness for the same reason. Its very unfortunate that they have to live in such harsh conditions. They have to shift their homes when the weather conditions worsen and they are always caught amidst communal violence. I was melancholic and could do nothing but empathize their situation. We are really blessed to have such a comfortable life and I couldn’t help but feel grateful.

We  waited for a while at the peak for co-trekkers to arrive munching on some energy bars, dry fruits and Methi vada from Chittale Bandhu. After this scary uphill, I thought the descent would be much simpler. But yet again I was wrong. The descent got way too complicated with a mixed terrain – loose rocks, followed by snow and mud. My knees were crying and after a while my right ankle began to hurt very badly. It was because of the fiasco in the morning while crossing the river. Somewhere in between the snow trail , I was all by myself. I could see nobody behind me and nobody ahead of me. My speed had slowed down tremendously because of my leg. Every step felt so heavy and daunting. I sat down for a while and told myself not to worry about the destination , but enjoy the journey without paying much attention to my leg. I trekked in my own pace after that, enjoying the scenic landscapes around. I clicked a lot of pictures of snow capped mountains, glaciers and flowers. 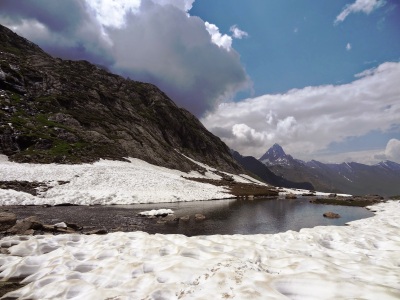 I felt alive and did not want this journey to end. It was that rare occasion which awakened the little child within me. I was jumping in my heart and smiling to myself. I was looking at my own reflection in the water and after a real long time I could see such a happy face. In our daily life we are so busy running a race that we hardly spend time with our own self and occasions such as these really help you unwind. I felt at peace and thanked God for such an heavenly experience. 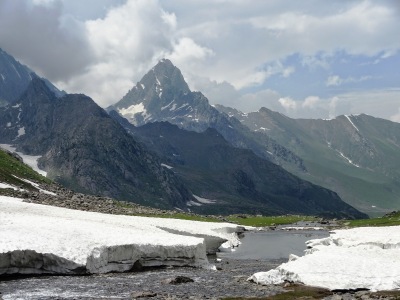 In about two hours I could spot other trekkers sitting by the river bed. I joined them and we broke for lunch. After a short lunch break, we proceeded further. We had already covered 8 kms and we had to trek for 9 more kms. Javed Bhai, our local trek guide enhanced our spirits all the time by making us believe  that the destination is not too far. He did not want us to be anxious about the long distances to cover. He walked way too fast and it was hard to keep pace with him. The pain in leg alleviated and I trekked really slowly along with Abhishek. In about half an hour we reached a fine looking lake – “Lake Gadsar”. The lake looked splendiferous with tall snow clad mountain range on one side; surrounded by a beautiful valley of flowers on the other. This “lake of fishes” completely freezes during winter and we could see a couple of floating icebergs. The view was fantastic and I spent a lot of time in deeply admiring its pulchritude.
The trail that followed felt like eternity. When your body gives up, its your mind that can work for you. I realized how powerful human mind is and this was a true test of my will power. I saw Yuta a.k.a. Iron Man, carrying a bagpack weighing almost 20 kilos and trekking with ease. I made him my source of inspiration to cover the remaining stretch, dragging my foot along the trail. Somewhere amidst the pencil thin mountain trail, we heard dogs barking. I looked around only to find Abhimanyu admonishing two fierce looking dogs with his walking stick. The sight was hilarious and the dogs looked at him with vengeful eyes. Finally, Nitin shooed away the dogs right in time and saved Abhimanyu from dog attack.
In about two hours we reached the Gadsar army camp. Gadsar army camp is just a small hut housing 5-8 army men. To move beyond the army camp, one needs permission from their Head quarters. You need to present a valid government ID proof and the Gadsar camp communicates with the HQ through walkie talkies. The HQ is equipped with a satellite phone of the army. It takes about an hour or so to get the green signal. The army personnel were happy to see some new faces. One Gujrati army officer was pleased to meet Ami and Chahna – the trekkers from Ahmedabad. He spoke to them in Gujrati and I could see that tinkle in his eyes,like he met a family member. It was nice to learn about their escapades and strange terrorist encounters. Huge respect for all the army men, who put their lives in such jeopardy so that we can sleep peacefully. Yet another reason to be grateful.
Once we got the green signal we proceeded towards our campsite crossing a few meadows, streams and river. 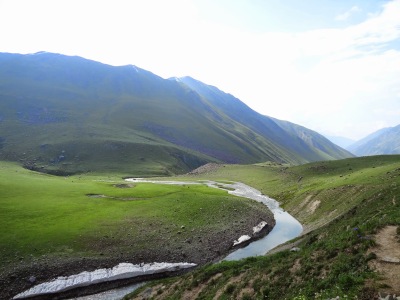 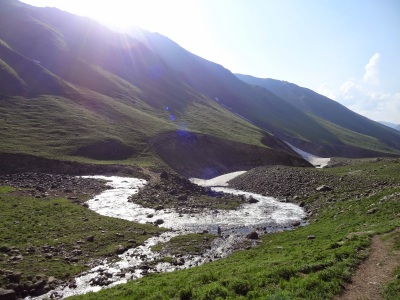 The joy of reaching the campsite knew no bounds. We reached at about 6 pm and it had been one hell of a day for me. It was indeed an ultimate test of strength,stamina and will power.
We played dumb charades all evening that turned into a complete laughter riot. With movies like “Chalta Purja”, “Yalgaar” and “Daulat ki Jung” everybody’s acting and guessing skills attained the most atrocious creative levels. Everybody was so immersed in this new world, with new friends and no one was bothered about what’s happening outside. I was a bit desperate to learn which team won the FootBall Worldcup Finals, but there was no means to know.

After an early dinner, I pampered my poor little leg and we crashed in no time. It had been just 4 days, half way through, but it felt like months together. The enthusiasm and spirit was very much alive and what lay ahead was still unknown. Was the journey going to get worse?

I am Mithila from India, an Innovation Catalyst by profession and a traveller by passion. I get the wanderlust genes from my parents who made me their backpack ever since I turned 1. I am not only ambitious but am also a free-spirit who loves to spread her wings and take that flight. I have varied interests and hobbies such as dancing, singing, painting and writing. I am always eager to learn something new or try out a new class. Follow my blog sites "A Traveller's Odyssey" and "Mittu Writes", where I share my travel experiences, likes, interests and passions. View all posts by Mithila